Your Shopping Cart | Check Out

History of the Kombucha Mushroom 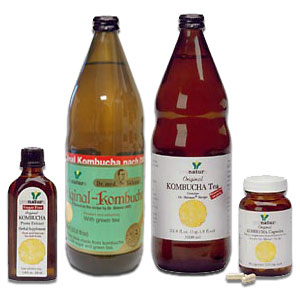 The tea mushroom is more than a mushroom - it is a symbiose of algae and fungus. Kombucha is a lichen (a type of moss). Kombucha is life, sustains life and promotes life.

It's homeland is East Asia where it is still a beloved home remedy.

Kombucha was known under the Chin Dynasty, 221 B.C. It was valued as an elixir for immortality and was believed to radiate magic strength.

The tea was known under various different names. One of the most famous was "Divine Tea," which to this day is given for chronic gastritis in the province Canton. Further, it is related how, in the year 414, a Korean doctor named Kombu successfully treated the emperor Inkyo in Japan. That's how the "Divine Tea" came from China via Korea to Japan and was now named "Cha" (tea of Kombucha) or "Kombu-cha"and found its way via Mongolia into Russia.

The knowledge about Kombucha spread fast in the East European countries and soon was a valuable home remedy in almost every household where it was used for digestion and circulation related illnesses. In both world wars, soldiers being kept as prisoners learned about Kombucha and returned home with memorable tales.

Dr. Rudolf Sklenar was the pioneer in using Kombucha in medical practices in the German speaking world. He reintroduced this ancient natural remedy and became world renowned through his intensive research and medical studies. In over 30 years of intensive work with Kombucha he recognized and tested the vast therapeutic possibilities of this "Divine Tea". To this day, doctors and homeopaths in Germany who use it extensively are having astonishing success with KOMBUCHA treatments.

History of Kombucha in Russia

In Russia after World War II incidents of cancer rapidly increased. In 1951 the Academy of Science in Russia and the Central Oncologic Research Institute in Moscow started to evaluate the statistical data regarding incidences of cancer in various regions. They studied in detail the living habits and environment of the population with the least amount individuals diagnosed with cancer.

Doctors found that in the regions of Ssalikamsk and Beresniki, in the middle western part of the Urals, there were hardly any individuals diagnosed with cancer. These regions, with their industries in potash, lead, mercury, and asbestos factories, produced more dangerous pollution than in other parts of Russia and the forest and fish in the area were all ready dying. The population in these regions also consumed high amounts of alcohol and nicotine. And yet, the incidence of disease was very low and the morale of the population was high, despite the data that indicated the water, earth, flora and fauna were highly contaminated.

After intensive investigation, the researchers found these areas to be highly contaminated. Despite this, the population in these regions were found to have a low incidence of various ailments, especially cancer. Doctors and scientists had no explanation to explain their incongruous findings.

One hot summer day Dr. Molodeiev, one of the lead doctors of the study, visited a family in the area and was offered a drink by the housekeeper. He found the drink to be refreshing and tasty. He asked about the origin of this drink and was told it was “Tea-Kvass.’ Dr. Molodeiev was surprised as he only knew “Kvass” which was prepared from fermented bread.

The old woman explained that “tea-Kvass” was not made from bread but was made with sweet tea which was fermented with the help of a mushroom. He still did not understand this process, so the woman showed him a room where 10 stoneware pots covered with linen cloth were kept on shelves. She told him that most every family in Ssalikamsk was preparing and drinking this “mushroom wine”. The “mushroom wine” had been a tradition in the area for hundreds of years. The woman told Dr. Molodeiev that Chinese scholars presented the mushroom as a gift to the Czar who did not like its taste, but he ordered the people to make “wine” out of the “tea”.

Through a similar incident, Dr. Grigoriyev learned about the tea mushroom in the area around Bersniki.

Doctors found that in both regions the “mushroom wine” was consumed in large quantities, but they were unable to identify this strange “tea mushroom” exactly.

The Moscow central Bacteriological Institute helped identify it as the little known “KOMBUCHA’. Their research basis was a handbook on fermenting bacteriology by the German W. Henneberg, 2nd edition of 1926. But this German handbook did not explain anything about the biochemical functions of the Kombucha symbiosis. Further information was sought from the biological-biochemical Central Institute in Moscow.

Prof. Vinovgradov, Stalin’s personal private physician, ordered intensive testing of Kombucha. Stalin was so depressed that the physician felt something had to be done. Stalin also suffered from severe cerebralsclerosis, and it was decided to treat this with Kombucha before a pharmaceutical preparation was developed. In 1952 Prof. Vinovgradov formed a committee of 12 physicians which agreed on the treatment with Kombucha.

Around the same time, rumors of a miracle substance against cancer reached the head of the secret service, Lavrenty Beria. Beria gave the go ahead on Stalin's treatment without consulting his deputies, the generals of the KGB, Ryumin and Ignatley.

On the other hand, Kombucha was an acceptable "undercover" treatment for cancer patients in prison hospitals. Testimony to this are works by Alexander Solzhenytsin, e.g. his autobiographies, Cancer Ward and his short story, The Right Hand. He describes in detail how he himself fell incurably ill with stomach cancer and countless metastases in the lung, liver and colon. He drank Kombucha grown in Birchleaf tea and miraculously cured himself completely. In his book Cancer Ward he describes how cancer stricken high government officials were willing to sacrifice all their fortunes to be able to obtain the “miracle mushroom”.

Kombucha is the ultimate protector of health and vitality.

Pronatura is pleased to offer its customers product brochures and literature upon request.